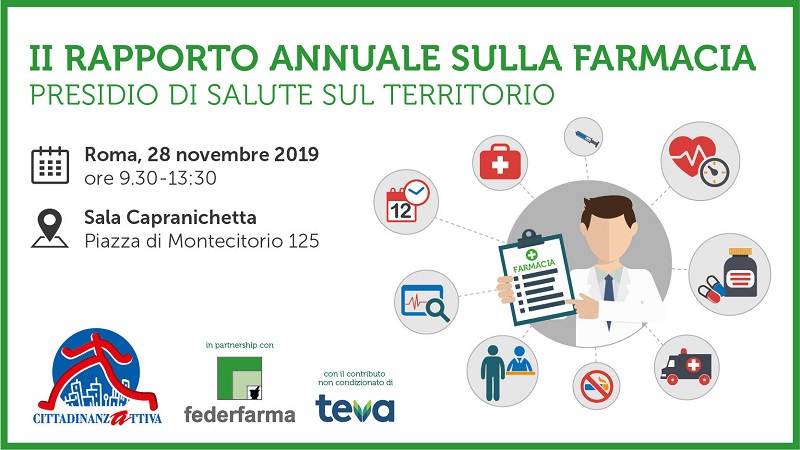 II civic investigation on the role of the pharmacies of Cittadinanzattiva and Federfarma: the citizens recognize as pivotal their role in support of health and therapeutic adherence.

Three-fourths of the citizens have their own trusted pharmacy where they usually go to; equally high (73%) is the percentage of those who are aware of the fact that for several years by now pharmacies are enabled to provide new services for the citizens; significant is also the population (65% of the sample) that perceives the figure of the pharmacist as a professional dispenser of important advice for your health. This is the picture that emerges from the survey conducted by Cittadinanzattiva with the collaboration of Federfarma and with the unconditioned contribution of Teva, presented today in Rome and that concerned 10% of the pharmacies present on the territory.

The Report, to which 1915 pharmacies have contributed, highlights a series of barriers that still hinder the entire transition from the “trusted” pharmacy to the pharmacy “of services”, among which: a limited involvement of pharmacies (27%) in prevention and screening campaigns promoted from institutions; the poor involvement of pharmacies (only 20%) in the implementation process of the Electronic Health Record; an insufficient share, for the purpose of support of therapeutic adherence, telematics data between the pharmacy’s management and the information systems both of the Ministry of Health/AIFA (34%) but especially of the GP (only 12% of the pharmacies results interconnected with the family doctors); the necessity to strengthen dialogue and cooperation on a local level with the realities of civic association involved in the protection of health as a common good.

“Being the recipient of so much trust is an excellent condition to fully reach that pharmacy of services towards which, with the long-awaited agreement at the State-Regions Conference, it has finally been drawn the road to move from regional and local trials to a set up on a national basis. Moreover, the Pharmacy represents an important health garrison in the internal areas of the nation, an essential tool to use in the strategies and actions against health inequalities”, claims Antonio Gaudioso, General Secretary of Cittadinanzattiva.

“This second Report confirms that the pharmacies are enhancing patients’ therapy prevention and monitoring and that the citizens rely a great trust in pharmacies and pharmacists. From the analysis arises also that a structured commitment from the public part is still missing and that the development of the pharmacy moves in an uneven way on the territory. The trial of the Pharmacy of Services-which guidelines have been recently approved from the State-Regions Conference and for which is already scheduled a financing- can be the turning point to reverse this tendency”, observes Marco Cossolo, President of Federfarma.

“It also arises from the Report the fact that the rural pharmacies and pharmacies from deprived areas perform an egregious work on the territory despite the many difficulties and the scarcity of resource spaces and equipment. Specific signals are needed in favor of the small pharmacies that constitute a widespread garrison, essential for collective health” comments Silvia Pagliacci, President of Sunifar.

A peculiarity of this second edition is the direct contribution of information made by the citizens. As a matter of fact, a survey dedicated to pharmacists and pharmacies has been combined with one dedicated to citizens, since they are the service users of pharmacies: 1265 people from all Italian regions have responded, in slight prevalence women (56%).

65% of the citizens affirm that when facing a pharmacist, they are aware of the fact that they are dealing with a professional who gives out important health advice, and certainly not with a medicine sales and health centers manager. According to the people who took part to the survey, in the 41% of the cases the pharmacist is in contact with the family doctor or with the potential specialist who takes care of the person, knows which medicines the person usually takes (42%), it is full of advice regarding dosages or the means of taking when giving out the medicines (42%). Less frequently (32% of the cases) the pharmacist knows the pathologies of the person that relies on him and takes the initiative to deliver brochures or other information that he deems useful for the person who enters the pharmacy.

1915 pharmacies belonging to Federfarma and located on the entire national territory took part at the survey: the number of pharmacies increased (+33%) compared to the first edition, demonstrating a growing interest from those directly involved.

In this second edition, we focused on two aspects that allow pharmacies to better express their potential both in terms of health garrison on the territory (prevention/screening campaigns) and both in terms of support for the improvement of therapeutic adherence, perceived as a shared issue in the entire health sector.

The 38% is located in a rural area of the country, the remaining part in an urban area. The participation of pharmacies in campaigns for early diagnosis is massive: 84% of it took part in the last 24 months.

Moreover, 70% of the pharmacies involved in the investigation have joined institutional prevention campaigns (screenings organized by ASL/Region) related to colorectal cancer. 27% of them have also joined other institutional screenings, mainly concerning diabetes and hypertension. To a lesser extent, asthma, breast cancer, cardiovascular diseases and COPD. 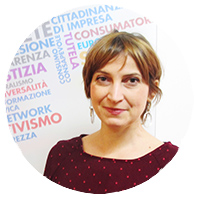